Brought to the police while hitchhiking

Hitchhiking my way to the temple, one driver really wanted to bring me to the police. I told her that I didn’t want to go to the police. Most likely it would only make the hitchhiking more difficult. But I had no choice.

With all her good intentions the lady brought me to the highway police. She knocked at the door and a police man showed up in a pajamas. After five minutes he seemed finally to be woken up and changed his pajamas for an uniform.

First things first; let’s take a photo. No, this time it was not me who asked for a photo. The highway police man asked me to pose with him for the photo.

Obviously I took advantage of the situation and asked politely if I could take a photo as well (I didn’t post that here out of privacy reasons).

Then he asked for my passport and took a photo of it. For what reasons? No idea… I just accepted it was it was on official police station.

Still I had no idea what we were going to do and the whole situation already took me twenty minutes. My last driver, the lady was still there as well. She spoke German to me all the time, assuming that I can speak German as I am from Holland. Well luckily I can speak a little bit German.

The police man walked to road and waited about ten minutes. Observing the cars. I thought; shall I just stick out my arm and try to stop cars? He seems to do nothing.

But after ten minutes he tried to stopped a car. Cool! The Thai police helps me hitchhiking! The first car ignored him. The second one stopped, it was a truck. Almost right to my destination!

Wow! That’s awesome. The police just helped me hitchhiking. Oh by the way; this happened in Iran and China as well.

Free food from a sweet lady

The truckers drove 500 meter and stopped directly. That’s what they tried to tell me when I got in. They were going to eat. I could wait is what they told me.

So I waited another 20 minutes. When they came back; they gave me a plastic bag. The person he gave it to me made a ‘thank you gesture’. Then he pointed at the lady of the restaurant on the other side of the big road. In the dark restaurant I saw a cute old lady.

Apparently she saw me and give me this nice rice with omelet meal. So sweet! Unfortunately the only thing I could give back was my ‘Thank you’ gesture as we drove of directly. Sweet lady.

Camp at a special temple

After the truck it took me one more car to go to the temple. I wanted to go to this temple as I read it’s a special one. As it would soon be dark, I was thinking to ask the monks if I could stay there.

Huh? Stay at the temple?

Camping at a temple? Yes, ask the monks nicely, mostly they are quite ok with it. Your chances are better out of the city.

Yes, I camped at a very special temple in Thailand. Of course I asked the monks nicely. They seemed super surprised but also were super nice to me.

With hundreds of colourful sculptures this temple looks a bit like a theme park. I hitchhiked to this remote place on purpose.

The sculptures range from huge animals and happy people to cruel scenes of what hell could be.

The monk allowed me to pitch my tent here. He proposed this beautiful spot in the photo. Later I moved a bit more out of sight under a roof.

They directly gave me soap, tooth paste and a tooth brush, maybe I needed it? But super kind! Great experience! 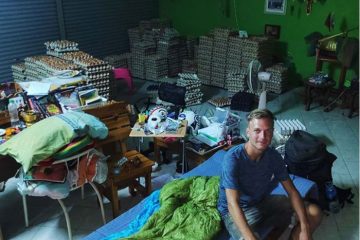 Sleeping in the Egg house

Sometimes I end up in the most interesting places while hitchhiking. This time I ended up in a quite weird place. I call it the Egg house.